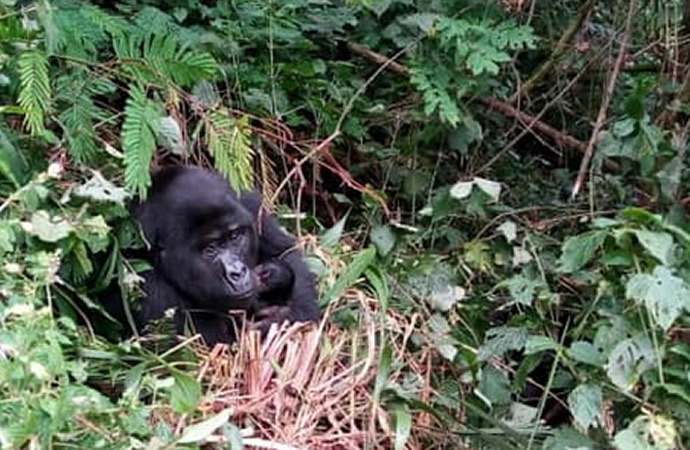 Mubare was the very first mountain gorilla group to be habituated and opened to tourists in 1993 when the first gorilla tracking safari was sold.

“We celebrate a newborn in Mubare group. Mother Businza and baby in good shape,” communicated an elated Mr. Mbwebwe.

The baby comes less than a year from when the International Union for the Conservation of Nature (IUCN) updated its Red List to lift the mountain gorilla from a critically endangered state to a less delicate state.

The number of mountain gorillas currently in the world, in the high altitudes of Uganda, Rwanda and DR Congo is estimated at about 1000 individuals, pending the results from the Bwindi gorilla census.

This newborn baby in Uganda, like many others, sheds yet a brighter beam of hope on this species which less than 30 years ago, was headed for extinction.

It is in times like this that we must commend the efforts of conservation organizations in the three countries for preserving this iconic species in the interest of generations to come but also commit to stepping up our efforts in preserving not only the mountain gorilla but all wildlife around the world.

Although Uganda recently increased the price for its gorilla tracking experience with an extra $100 for both Foreign Non-Residents and Foreign Residents, this East African country continues to dominate consumption rate over its two neighbors while still offering global travelers an excellent opportunity to fulfill their lifelong dreams of viewing these rare animals in the famous activity called the Uganda gorilla safari, which has been dubbed “the greatest wildlife experience on earth” by Rough Guides’ Managing Editor, Keith Drew.

Uganda still offers a much more affordable gorilla trek for foreign tourists compared to its close competitor who doubled her fee in 2017 from US$750 to US$1500 per person tracking the same gorilla species; making it US$800 more expensive than Uganda.

East African Citizens can have an even bigger discount on the gorilla tracking permit; only 250,000 Uganda shillings per person (less than $70).

Gorilla safaris currently attract the most revenue for the Uganda Wildlife Authority (UWA), an organization mandated to manage the country’s 10 national parks and 12 wildlife reserves.

“The money collected from the sale of mountain gorilla permits has helped us conserve these special animals as well as support the local communities living around our gorilla parks,” said Mr. Sam Mwandha, the UWA Executive Director, while speaking at the tourism stakeholders meeting last month.

This goes a long way in the funding of schools, hospitals, and other community projects which uplift the livelihood of the people living around the two parks of Mgahinga and Bwindi.